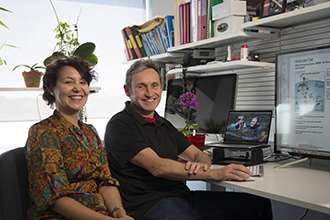 An international research team has found a way to improve the anti-cancer effect of a new medicine class called ‘Smac mimetics’.

The team discovered how a protein called MK2 helps to keep cancer cells alive, making them resistant to the anti-cancer effects of Smac mimetics. The findings provide a rationale for combining inhibitors of MK2 with Smac mimetics as a potentially powerful new combination therapy for cancers with few treatment options, such as acute myeloid leukaemia (AML).

“We knew these two agents could be combined, but didn’t fully understand the how they worked together at the molecular level,” Dr Lalaoui said.

“This latest study has pinpointed the MK2 protein as critical for the combination of Smac mimetics and p38 inhibitors to have a potent anti-cancer effect. As well as understanding our previous discovery better, it also highlights MK2 as an exciting new target for anti-cancer therapies, particularly in combination with Smac mimetics.”

Professor Silke said the research was part of a growing trend in the field, taking ‘rational’ approaches to treating cancer better, particularly through selecting combinations of anti-cancer agents.

“By understanding precisely which molecules are helping cancer cells to survive and evade treatment, we can develop smarter ways to kill these cells,” Professor Silke said.

“In the first place, the rational development of combination therapies has the potential to provide new treatments for cancers, such as AML, that have previously had poor outcomes.”
He said another potential benefit of combined anti-cancer therapies could be using each agent at lower doses.

“With a combined approach, the agents could still kill the cancer cell but with fewer harmful side effects on healthy tissues. Our goal is to develop cancer treatments that are both safer and more powerful than are currently available” Professor Silke said.