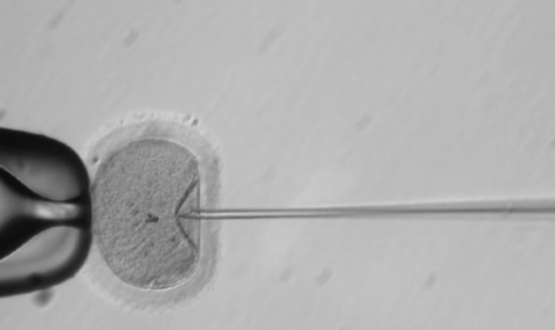 Researchers have demonstrated they can efficiently improve the DNA of human embryos.

The first known attempt at creating genetically modified human embryos in the United States has been carried out by a team of researchers in Portland, Oregon, MIT Technology Review has learned.

The effort, led by Shoukhrat Mitalipov of Oregon Health and Science University, involved changing the DNA of a large number of one-cell embryos with the gene-editing technique CRISPR, according to people familiar with the scientific results.

Until now, American scientists have watched with a combination of awe, envy, and some alarm as scientists elsewhere were first to explore the controversial practice. To date, three previous reports of editing human embryos were all published by scientists in China.

Now Mitalipov is believed to have broken new ground both in the number of embryos experimented upon and by demonstrating that it is possible to safely and efficiently correct defective genes that cause inherited diseases.

Although none of the embryos were allowed to develop for more than a few days—and there was never any intention of implanting them into a womb—the experiments are a milestone on what may prove to be an inevitable journey toward the birth of the first genetically modified humans.

In altering the DNA code of human embryos, the objective of scientists is to show that they can eradicate or correct genes that cause inherited disease, like the blood condition beta-thalassemia. The process is termed “germline engineering” because any genetically modified child would then pass the changes on to subsequent generations via their own germ cells—the egg and sperm.

Some critics say germline experiments could open the floodgates to a brave new world of “designer babies” engineered with genetic enhancements—a prospect bitterly opposed by a range of religious organizations, civil society groups, and biotech companies.

Reached by Skype, Mitalipov declined to comment on the results, which he said are pending publication. But other scientists confirmed the editing of embryos using CRISPR. “So far as I know this will be the first study reported in the U.S.,” says Jun Wu, a collaborator at the Salk Institute, in La Jolla, California, who played a role in the project.

The earlier Chinese publications, although limited in scope, found CRISPR caused editing errors and that the desired DNA changes were taken up not by all the cells of an embryo, only some. That effect, called mosaicism, lent weight to arguments that germline editing would be an unsafe way to create a person.

But Mitalipov and his colleagues are said to have convincingly shown that it is possible to avoid both mosaicism and “off-target” effects, as the CRISPR errors are known.

A person familiar with the research says “many tens” of human IVF embryos were created for the experiment using the donated sperm of men carrying inherited disease mutations. Embryos at this stage are tiny clumps of cells invisible to the naked eye. MIT Technology Review could not determine which disease genes had been chosen for editing.

“It is proof of principle that it can work. They significantly reduced mosaicism. I don’t think it’s the start of clinical trials yet, but it does take it further than anyone has before,” said a scientist familiar with the project.

Mitalipov’s group appears to have overcome earlier difficulties by “getting in early” and injecting CRISPR into the eggs at the same time they were fertilized with sperm.

That concept is similar to one tested in mice by Tony Perry of Bath University. Perry successfully edited the mouse gene for coat color, changing the fur of the offspring from the expected brown to white.

Somewhat prophetically, Perry’s paper on the research, published at the end of 2014, said, “This or analogous approaches may one day enable human genome targeting or editing during very early development.”

Born in Kazakhstan when it was part of the former Soviet Union, Mitalipov has for years pushed scientific boundaries. In 2007, he unveiled the world’s first cloned monkeys. Then, in 2013, he created human embryos through cloning, as a way of creating patient-specific stem cells.

His team’s move into embryo editing coincides with a report by the U.S. National Academy of Sciences in February that was widely seen as providing a green light for lab research on germline modification.

The report also offered qualified support for the use of CRISPR for making gene-edited babies, but only if it were deployed for the elimination of serious diseases.

The advisory committee drew a red line at genetic enhancements—like higher intelligence. “Genome editing to enhance traits or abilities beyond ordinary health raises concerns about whether the benefits can outweigh the risks, and about fairness if available only to some people,” said Alta Charo, co-chair of the NAS’s study committee and professor of law and bioethics at the University of Wisconsin–Madison.

In the U.S., any effort to turn an edited IVF embryo into a baby has been blocked by Congress, which added language to the U.S. Food & Drug Administration funding bill forbidding it from approving clinical trials of the concept.

Despite such barriers, the creation of a gene-edited person could be attempted at any moment, including by IVF clinics operating facilities in countries where there are no such legal restrictions.

*adopted from Steve Connor a freelance journalist based in the U.K.