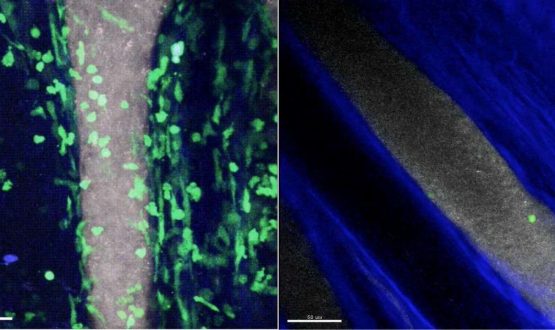 Inflammatory arthritis, whether as a result of rheumatoid arthritis, lupus, or another autoimmune disease, often stems from a type III hypersensitivity, a type of reaction that is mediated by complexes of antibodies and their matching antigen. These complexes aggregate in the body tissues and result in a neutrophil-centered inflammatory response. Neutrophils are the most common type of leukocyte circulating in the bloodstream and often the first cell type to arrive on the scene of infection or inflammation.

“The control of immune cell entry into the joint represents a major point at which new therapies could be developed to reduce the symptoms of inflammatory arthritis,” explained senior author Andrew Luster, MD, PhD. “Imaging of the joint could help evaluate the mechanism of a drug’s therapeutic effect, and if a process turns out to be mediated by more than one chemoattractant, understanding the mechanism would allow the rational design of combination therapies to completely shut down critical steps in the process.”

The new imaging technique is called “multiphoton intravital microscopy,” and it was developed by fellow CIID investigator Thorsten Mempel, MD, PhD, also a co-author of the study. Luster and his team used Mempel’s method to observe moving immune cells in real time in a mouse model of rheumatoid arthritis.

“Inflammatory arthritis is caused when immune cells are recruited from the blood into the joint in a highly regulated process controlled by chemoattractants and adhesion receptors,” Luster said. “But when the disease has become symptomatic, it is difficult to determine the initial steps that set off the recruitment of immune cells into the joint and the specific roles of the different chemoattractants.”

The found that the immune complexes known to be responsible for triggering inflammation did so by prompting the production of a chemoattractant called complement C5a, a factor usually part of an innate, nonspecific immune response.

They also saw that complement C5a being displayed on the inner walls of blood vessels, which then gathered neutrophils to adhere to the vessel wall as well. After interacting with complement C5a, neutrophils continue on to the joint where they contribute to the inflammatory reaction.

Neutrophils do some of the “dirty work” themselves as well; they release interleukin-1 (IL-1), a chemical messenger that brings even more neutrophils to their location via chemokine signaling. Neutrophils also produce chemokines on their own, creating a domino effect of chemoattractant production that results in more and more neutrophils finding their way to the join to cause inflammation.

Even with bountiful new insight on how type III hypersensitivity reactions contribute to inflammatory arthritis, Luster and his team aren’t quite done. They hope to continue using multiphoton intravital microscopy to make more discoveries in the world of inflammatory arthritis. What other molecules are involved in recruiting neutrophils to the inflamed joint? What about other immune cells? How, if at all, are T cells, B cells, macrophages, dendritic cells, and others involved in type III hypersensitivity reactions? Stay tuned!

The present study was recently published in the journal Science Immunology.